Some Good Advice to Our 2019 Graduates

It’s tough to top the commencement speaker who told graduates he would pay off their student loans, but others had some memorable lines, too — and not all were spoken. 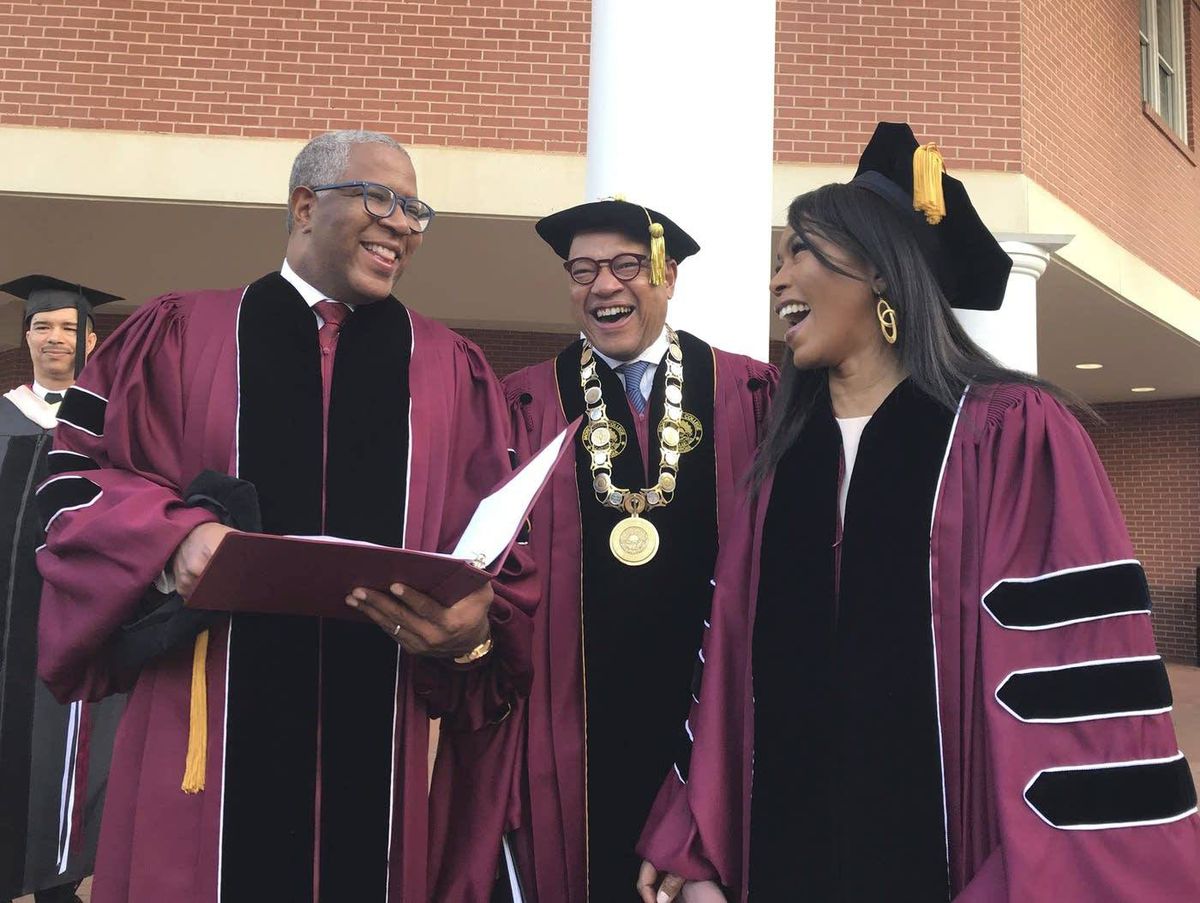 Robert F. Smith, left, laughs with Morehouse College President David Thomas, center, and actress Angela Bassett at Morehouse College on Sunday, May 19, 2019, in Atlanta. Smith, a billionaire technology investor and philanthropist, said he will provide grants to wipe out the student loan debt of the entire graduating class at Morehouse — an estimated $40 million.  Bo Emerson, Atlanta Journal-Constitution via Associated Press.

As commencement speeches go, it will be hard to top the one in which a Texas businessman told Morehead College graduates in Atlanta that he and his family would be paying off their student loans.

The stunning gift from Robert F. Smith, estimated to cost about $40 million, quickly ricocheted around social media, raising the bar for other speakers.

Oprah Winfrey, who spoke at Colorado College’s commencement and gave each graduate a copy of her new book, “The Path Made Clear,” had to defend herself after an Instagram user said she also should have paid off the graduates’ debt. (Winfrey responded that she  had already given $13 million in scholarships and paid tuition for 400 Morehead students.)

A few other speakers, including author Roxane Gay, pre-emptively told their audiences not to expect a similar gift, with Gay noting at Pratt Institute that she had $150,000 in student loan debt of her own.

But commencement speakers who had only words to offer graduates and their families made headlines as well. One, author Tara Westover, even sang the first verse of “How Great Thou Art” at Northeastern University in Boston.

Graduation ceremonies will continue in the U.S. through the middle of June, but here’s a sampling of the best things that have been said so far.

“We’ve taken individualism to the extreme and in so doing we’ve weakened the connections between people. When you look at how these values have distorted our society, you realize that the first thing we need is a shift in culture. The revolution will be moral or it will be not at all.”

“Don’t waste time on problems that have been solved. Don’t get hung up on what other people say is practical. Instead, steer your ship into the choppy seas. Look for the rough spots, the problems that seem too big, the complexities that other people are content to work around. It’s in those places that you will find your purpose. It’s there that you can make your greatest contribution.”

“Mark Twain said that traveling was fatal to prejudice, bigotry and narrow-mindedness. We live in a country where we have so many options, and for so many people in the world, our worst days would almost be a dream come true for them. Try to continue your education for yourself on your own terms. So keep your passports updated.”

“Class of 2019, make no mistake about it. Live as if this is the fourth quarter. The world is a serious place, and your life is the most serious thing you have. Don’t spend it away in a pleasure-induced stupor at the cost of your personal power. This moment is not a rehearsal.”

“Online, no one has acne or dark circles or a temper; no one washes dishes, does laundry or scrubs toilets. Mostly, we brunch. … But sometimes I think that when we deny what is worst about ourselves, we also deny what is best. … We forget that it is our flawed human self, and not our avatar, who creates things and reconsiders and forgives and shows mercy.”

“What can be done to focus more on threats to religious freedom? They are real and will get real. You know this. The polls are interesting. They say Americans are not always breaking down the doors to go to church, but they respect religious life. They intuitively understand the crucial nature of religious institutions, and they don’t want to see them under siege. They don’t want long-held religious beliefs compromised or trampled by the state.”

“I won’t tell you to get married or not get married, but I will say this to you: Find someone who is better than you, and convince them to spend their lives with you.”

“I have teenage kids. I see lots of eye-rolling. But if you roll your eyes at somebody you love, woe be unto you. That is a little act that effectively says, “You are worthless,” to the one person — your spouse — you should love more than any other. Do you want to see if a couple will end up in divorce court? Watch them discuss contentious topics and see if either partner rolls his or her eyes.”

“Unfortunately, I cannot offer to pay your student loans, but I strongly encourage those who can to do so.”

Thank you for visiting! I hope you enjoy the things shared here.
View all posts by Ann Laemmlen Lewis →
This entry was posted in Thoughts and Insights. Bookmark the permalink.